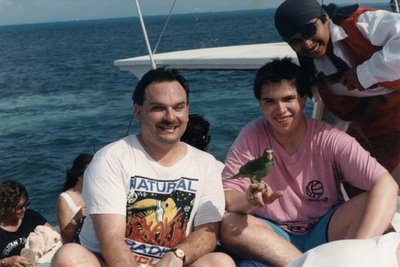 Today is our anniversary. As gay couples can not marry, we must choose a significant date to observe our anniversary. On November 17, 1989 Brett and I met for the first time for lunch at the Sports Page in Downtown Cincinnati. We hit it off and had dinner that night in Clifton and a movie. We had chatted on-line for several months and never realized that we lived a few miles apart. Within a year, I had returned to NE Ohio and Brett moved in to my house on Halloween. So, November 17 is our significant date on which we celebrate our anniversary.

The photo above was from our first vacation to Cancun. I think that it was at our first anniversary during Thanksgiving week. Where did those young, skinny guys go? After selecting this photo from the album, I realized that it was from our catamaran cruise to Isla Mujeres. Oh I remember it well. We had a lovely picnic on the beach and I returned for our final night in Cancun with a serious case of La Turista. Don’t eat the fish!

17 years later we are still hanging in, many pounds more and many hairs less. I love you, Brett. Happy anniversary.