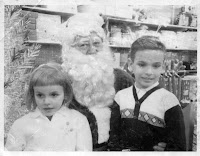 I thought I would periodically reminisce about Christmas pasts in the coming weeks. Memories of Christmas at our house are some of the most precious ones I have. Today, I thought I’d start this off with my memories of Christmas stockings. The stockings that I am speaking of are not the ones hanging from the mantle; filled on Christmas Eve by Santa.

In the 50s and 60s it was very popular to belong to lodges. My father belonged to the Elks and Moose lodges; American Legion and VFW veteran lodges; and the William Penn Society, Dante, Roma, and Christopher Columbus fraternal societies. Most men did at that time. For my father, it was important since he ran a family bar. His support and participation in these lodges were part of doing business.

Every Christmas season these lodges would host Christmas parties for the children of lodge members on a Saturday during the month of December. My brother, sister and I eagerly anticipated the parties. Because of my father’s memberships in so many of these societies, we attended quite a few of the parties. It was my mother’s job to haul us around on those Saturdays to a couple of parties. These parties always involved a visit from Santa, singing Christmas carols, cookies and punch and the best prize of all; a Christmas stocking.

If you are a baby boomer, you know about these stockings. They were red plastic mesh, similar to the citrus bags that hold oranges with a paper collar printed with a Christmas image. The contents were pretty standard: an orange, apple, red or green wax paper wrapped popcorn ball, candy and maybe a small trinket or two. As plain as it sounds, they were a true treasure for us. Today’s popcorn balls in cellophane are a far cry from the sweet, sticky balls encased in the wax paper.

I began to wonder why such a nominal gift meant so much to us. I think it was because Christmas was no where as commercial as it was today. Children had less extravagant and less costly toys. There was the tradition that truly special gifts and toys were given only two times a year. You got something special for your birthday and Christmas. Today, children have just about anything they want and get them anytime they ask for them. There was this real anticipation of Christmas and what would be under the tree. The stockings were sort of the appetizers for the meal.

I am pretty certain these Christmas parties are gone or have changed significantly over the years. Lodges and fraternal organizations are nearing extinction. Children would not appreciate or attend a party like the ones of my youth. The organizations could not afford the gifts today’s children would expect to find in a stocking. However, it is a memory that is dear to my heart.

That’s my sister Cindy and I in the photo with Santa taken in December of 1960.