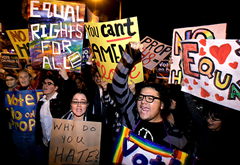 With Valentine’s Day approaching on Saturday, I continue my week of posts devoted to same sex marriage. As an avid reader of blogs and news web sites, I’ve spent the past few months reading the press after Prop 8 in California passed. An argument that I find intriguing is the assertion from Prop 8 proponents that same sex marriage is not a civil right.

Marriage is not mentioned in the Constitution. It is not a civil right in written form. It is indeed a civil right by custom and implication. The United States was established with separation of Church and State for a variety of reasons, most notably the protection of religion from persecution by the government. Marriage did not play into the equation at that time in our history. Most immigrants came from similar Christian, Catholic or Jewish traditions that held similar views on how marriage was defined. There was no reason to include marriage in the Constitution.

Marriage is defined through legislation and laws. In this country a marriage license is the point at which a secular marriage joins with a civil marriage. This license bestows benefits (civil rights) to couples who have been secularly married. An important thing to note here is that a couple does not have to be secularly married to enjoy these rights. People are routinely married in civil ceremonies by justices of the peace, judges, mayors, or other government officials who have been granted this authority through legislation.

LGBT people are not asking for any changes in laws or practices that affect secular marriage. They want the government to recognize their loving, healthy, committed relationships in the same manner that the so called “traditional” marriages are recognized. LGBT marriage activists have been calling for the end of this discrimination and recognition of their relationship’s civil rights associated with marriage in the United States.

The above paragraph simply states the desired outcome for same sex marriage supporters. It has nothing to do with degrading the value of marriage; a large percentage of traditional married couples do that quite nicely today. There is no desire to force churches and synagogues to perform civil marriages or change the manner in which they perform secular marriages. The weakest argument (and the most effective one) of Prop 8 supporters that same sex marriage will force schools to somehow “encourage” same sex marriage is totally off-base and a fabricated lie.

It is simple. LGBT people should not be denied civil rights. Excluding a group from rights granted to all citizens is discrimination. Marriage is a right that this government recognizes and bestows privileges to. Secular marriage is off limits from legislation per the separation of Church and State.