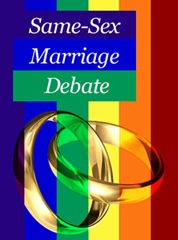 I am concluding this week of posts about same sex marriage with what I consider the facts.