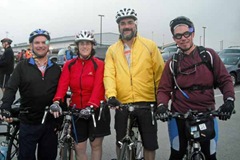 This past Sunday I attempted my first century bike ride, the Hancock Horizontal Hundred (HHH) in Findlay and Hancock County Ohio wih my partner Brett, friend Susan and her Brother Keith. You will notice that I “attempted” the ride. I was unable to finish the century route. For those non-cyclists, a century is a 100 mile one day bike ride. Many cycling clubs host these events as a fundraiser, social activity with cyclists, and way to showcase their area. 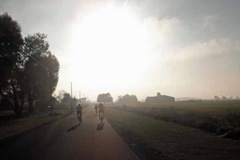 I did complete a metric century. That is a 62 mile ride. According to my bike GPS, I cycled 63.4 miles. I was just wondering about one of these cycling events in Canada. The 62 miles would be the century. What would be 100 mile ride be? The imperial century? I guess I need to find out next year. 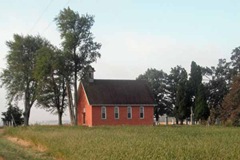 What stopped me from doing the 100 miles? I would like to blame it on the wind. There was a 20-25 mph NW wind throughout the day. The day started out very easy as we cycled east through Arcadia and then south through Vanlue and Mt. Blanchard. In late morning, I headed west and north to Arlington. The cycling became noticeably harder. The strong headwind really made me work for the miles. I was pushing as hard as I could and could barely make 10 mph. 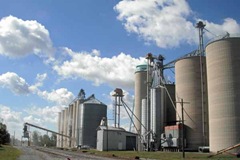 At lunch in Arlington, I knew I had to make a choice. This is where the metric century and century turned opposite ways. My partner Brett was also torn but leaning on completing the century. My energy level was really on low. I had hoped the rest at lunch would give me the power I needed. The next century segment headed west to Bluffton for 14 miles into the wind. I took some real good inventory of my energy level, skills, and attitude. 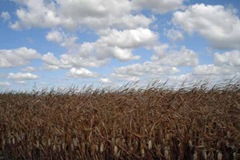 Brett and I pedaled to the end of the Arlington High School drive where we had to make our choices. Turing left and you continued on the metric century; turning right you headed on to the full century. We both made quick decisions. I turned left and Brett turned right. I quickly learned that I made the correct choice. I had several miles west to travel immediately followed by many miles north. The wind continued to batter me constantly. It was the hardest cycling I have ever done. I was determined to finish the ride and plugged away to the finish line. I was so happy crossing that finish line. The Hancock Handlebar members, families and other folks cheered you on as you passed the line. What a finish! 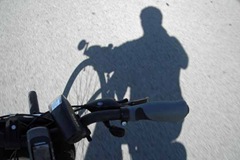 Cycling has really taught me a lot this year, my first year of more ambitious cycling and participating in organized rides. It seems obvious that you need to physically prepare yourself for these physical challenges. I usually ride a few time each week totaling about 50-60 miles. I need to up that mileage to better prepare myself. 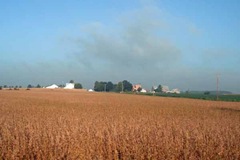 I can’t stress enough the importance of feeding your body for the journey. As a WLS patient, I tend to eat less and avoid sweets and carbs. A good ride starts with a good breakfast. Rest stops can’t be taken lightly. I do a couple of orange quarters and a Ho Ho or Hostess Cupcake offered by the ride sponsors. I know what you are thinking… “Hostess Cupcakes!” Believe me, I learned on Petal to the Point that that a cupcake gave me the energy I needed to keep going. I have also snuck in a Snickers bar. When you are burning up to an additional 5,000 calories in a day, you need that sugar to burn. Beyond the sugars, water and hydration is the #1 thing you need to pay attention to. I found that drinking on the quarter hour and when I am thirsty works the best. 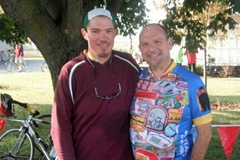 Knowing your body’s limits is the next import thing I have learned. There are those nagging aches and pains that remind you that you are pushing the limit. It’s good to press that limit. The challenge is knowing when to stop before you cause yourself physical hurt. Interesting enough I was in relatively good position on this ride. I did suspect that this would change on that 14 mile century death march west after lunch. 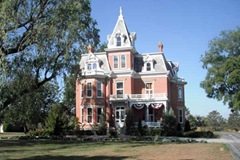 You also need to put your mental state in the right order. It’s important to psychologically know that you can do the ride. I did that well on Pedal to the Point. On this type of physically demanding exercises, metal state can bring you down if you are not in that right state of mind. As analytical as I am, I analyzed that map and possible outcomes. I focused on a lot of the bad outcomes. More than anything, I did not want to find myself in the back of a support van riding to the finish line. My mental state was definitely not as focused as it should have been. 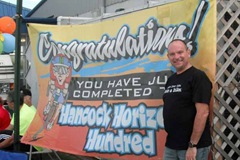 Given the above four factors (physical preparedness, proper nutrition, knowing your body’s limits, and proper mental state), what factored the most in my final outcomes? I had proper nutrition down. The reality was that I was pretty physically prepared but could have been a little more prepared. I think the combination of proper mental state and knowing my body’s limits were the two main factors. I have no doubt that I could not have completed the century. Mentally, I knew my body was telling me to do the metric. It was the correct choice. I still feel a sense of accomplishment. I wish it was the century, but I’ll take the metric century. 63.4 miles is a hell of a good ride for me and I was done by 2:00 p.m. More than anything, I have learned a lot more about how Tom Bilcze ticks and that will serve me well in the future.