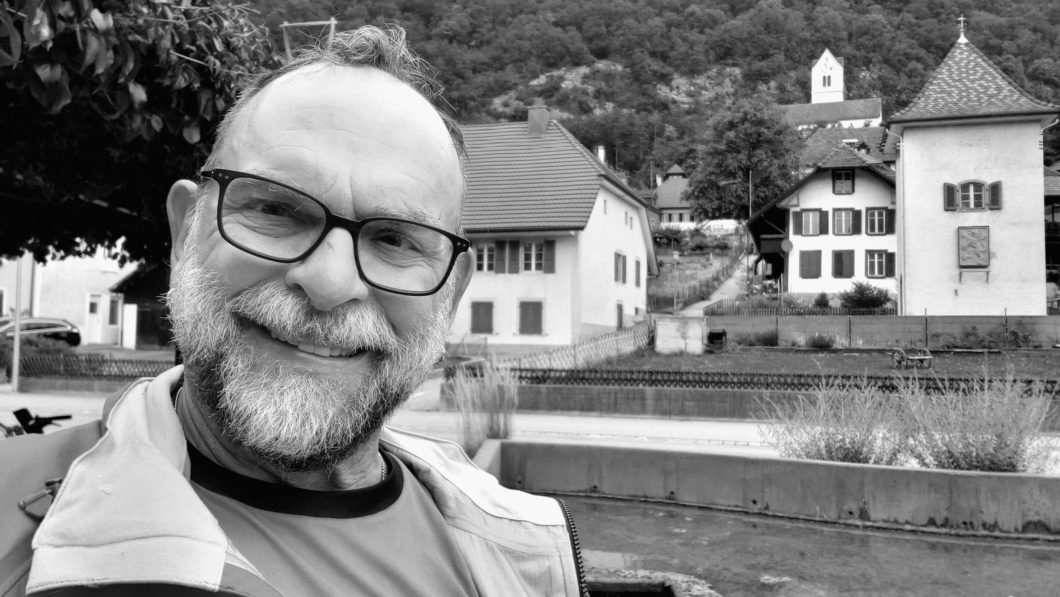 One of the primary reasons for choosing Switzerland as the destination for my 2019 European bicycle tour was to connect to my mother’s family roots. She was born in Switzerland, living there for the first four years of her life.

The first half of my 20-day tour was exploring western Switzerland and Germany along the shores of Lake Constance. I was flying in and out of Zurich and found that Pieterlen, my mother’s birthplace, was 120 kilometers west. Pieterlen and Zurich are both near the Swiss national bicycle route 5, the Mittelland Route. I found a bicycle tour operator that set me up with an equipped touring bike and handled my accommodations and luggage transfer. I extended my tour to western Switzerland and the Mittelland.

The three days I spent on the bike heading west through the Swiss Mittelland (middle land) was nothing short of amazing. The route followed the Aare River valley through a series of villages, towns, and cities. The scenery was beautiful with the Jura Mountains to the north and open farmlands and rolling hills lining the river valley. It was a beautiful ride.

Family history is best passed down through verbal exchanges. I was fortunate to learn of my mother’s Swiss roots through her family stories of immigrating from Switzerland and her visits to Switzerland later in her life. Unfortunately, I was remiss in writing them down and being more inquisitive when I was younger, This post is my story of what I learned about the Swiss, Pieterlen, and my experiences on my bike.

What I knew about my roots

My mother’s family lived in Pieterlen, Switzerland. Pieterlen is a small town of about 5,000 people in the Aare River valley. Other family documents show that the family also lived in Meinisberg. This smaller village of 1,500 is only a few kilometers from Pieterlen. It is south of Pieterlen very close to the Aare River.

Pieterlen sits in the Aare River valley with Solothurn 20 kilometers to the east and Biel 10 kilometers to the west. It sits at the foot of the Jura Mountains. Most villages and towns in this area hug the bottom of the mountains on the far edge of the river valley. The open land in the valley is dotted with mixed farmland of corn, soybeans, sunflowers and dairy farms. Grapes and orchards are also present but less common.

Solothurn, my home base for my two days touring this area, is a beautiful Swiss city. It is noted for its Baroque architecture. I highly recommend a visit to Solothurn. I found the prices to be somewhat reasonable for Switzerland. English is more openly spoken. I did not have the time to visit Biel, something that I regret.

Observations of the Swiss

These are my personal observations. I heard the term “Swiss it up” on my tour. That slang means to take something and highly organize and make it the best. That sums up the Swiss. There are highly organized and love structure and rules.

You find Swiss homes, villages and farms to be quite neat, organized, and filled with gardens and flowers. They are very proud of their heritage and preserve it. I have never been to a country that is cleaner, even in large cities and remote farms. They appear to be obsessed with cleanliness.

They appear to be largely protestant rather than Catholic, Catholicism is more obvious in Germany and Austria. The Reformation made great changes in the country moving from Catholicism to Protestantism.

They are independent and do not belong to the European Union. Two votes to join the EU failed. The Swiss vote on everything. They are a direct democracy which means they can vote and change any law that their parliament passes.

The cost of living is high but so are wages. Taxes are among the lowest in Europe. The visitor to Switzerland can expect to pay $35-$45 for dinner in large cities and about $25-$35 in smaller towns and villages. Most goods are priced 50%-100% more than in the USA.

The Swiss are conservative by European standards. A Danish friend living in Zurich reminded me that the conservative Swiss person is more to the left an American Democrat. The Swiss embrace socialized medicine and are puzzled by the American health care system.

The Swiss speak multiple languages. French and Italian are common in the border areas. Schweitzer Deutch commonly known as Swiss German is spoken. This dialect is very similar to what the Amish in America speaks.

The Swiss are reserved but friendly. I encountered many people on my tour. My greetings from the bike usually went unanswered. However, they were always willing to help me when I needed assistance.

The Swiss have a more sophisticated transportation network than the USA. Trains are the norm. Their trains are clean and modern and operate on a strict time schedule. It not uncommon to be able to catch a train to your destination very 30 minutes.

Bus and tram networks connect to the trains at all train stations, even in smaller towns. Bicycles are extremely common and used for transportation and everyday tasks. That contrasts with the American usage of bikes for recreation.

Bicyclists and pedestrians are given the right-away and respected. It is uncommon for a motorist to not yield to the cyclists. Cars are common but used less for everyday tasks. This is most likely due to the cost of gas being around $6 a gallon. The Swiss are less auto-centered.

The Swiss are more active. This is obvious in the number of people I passed walking and cycling. The large number of bikes at markets and train stations tell that story.

I left Swiss bicycle route 5 just west of Buren. I cycled through flat farmland on quiet roads a few kilometers to Meinisberg. This is small village on the edge of farmland. It has a small village center but is largely residential.

Just outside of Meinisberg, I turned onto a cycle path that took me 6-kilometers to Pieterlen. Cycle paths are common means of transportation even in rural areas. The path ended at the Pieterlen train station. The path connects the Meinisberg to the train. The train station had a full bicycle parking area, very common in Switzerland.

Pieterlen was larger than I expected. I left the cycle path and cycled quiet back streets for a few blocks into the town. This appears to be a commuter village for Biel and Solothurn that are easily accessed by train. Three and four-story apartment building were common.

It was slightly uphill to Solothurnstrasse, the main street. Pieterlen literally hugs the Jura Mountains. Buildings rose up the hillside for several blocks. The village church was prominent at the top of the village. The main street was lined with small shops. It was maybe 6-8 blocks with many businesses straddling the edges of town. I stopped for a pastry at M. Schneider’s Backerie.

As with most of Switzerland, I found the town to be neat and tidy. Litter is non-existent and properties maintained well. This is obviously ingrained in the Swiss. I only visited the town for an hour but found it rewarding to see where my mother’s family lived.

I can only imagine my grandparent’s shock when they arrived in West Virginia. I had been told by my mother that my grandfather was never happy in America. I can see why after this visit. He left a land that was clean and rich with tradition. I don’t know the economics of Switzerland at that time, but I suspect it was OK. I am sure he moved his family with the promise of a better life in America. That was the trend at that time. The land is expensive and limited in Switzerland, I was often told he was looking for a larger piece of land to call his own, possibly a farm.

My grandparents raised their family in the United States. They encountered a different experience than did my father’s Hungarian family. My father’s family lived in a Hungarian-American neighborhood where Hungarian traditions were persevered, celebrated, and passed on in their new homes. They openly spoke Hungarian. My mother’s family was one of a few Swiss families in a town where they abandoned living in their Swiss heritage. They had to become Americanized much sooner to survive. A prime example is my mother and most of her siblings who could only speak a limited number of German words. This contrasts to my father and his siblings who spoke fluent Hungarian.

I was unable to connect with Swiss relatives. The loose connections of my grandparents to their Swiss family is sad. I know from my mother’s Swiss visits that there are Swiss family members. I am continuing to delve into my family tree. My hope is to uncover and connect with these relatives. I am certain I will return to Switzerland. I would love to cycle the Mittelland route from Geneva to Lake Constance.