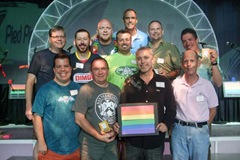 We are waiting for our flight in the Miami Delta Sky Club, a nice perk Brett gets for all his travels. Vacation is coming to an end. Debarkation took several hours since everyone had to go through US Immigration and Customs.

Last night was super nice. We did the premium steakhouse on the ship. It was so so good. The service is a step up from the normal dining room. Our waitress was so concerned we were only eating half our food. We both got 7 ounce filets and left about 1/2. We also did French onion soup and a salad. That filled us up. She was trying everything to get us to do a dessert. They were spectacular but we passed. She was insisting we get them to go since they are signature items from their menu. All I can say is that my lap band was working well.

Our Pied Piper group had a final event right before dinner, the Rainbow Family Feud. It was GLBT trivia combined with Family Feud. The seven of us who have been hanging around together during the cruise formed a team. Teams were of 10 and we rounded out ours with some other folks. The surprising thing was that our team beat the other five teams and were the winners! It was a blast and although some of our friends had to be coerced, they all had a fun time playing. This was a nice evening to end our vacation.