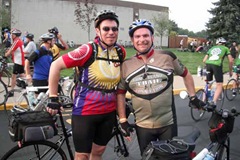 This past weekend I cycled in the MS Pedal to the Point charity bike ride from Cleveland to Sandusky. I rode 75 miles on Saturday and 75 on the Sunday return. My partner Brett cycled with me. It was a memorable event. More importantly, this was my big goal for 2010 to cycle in a long distance ride like this. Multiple Sclerosis is a great charity making this ride an easy choice. 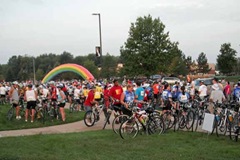 I spent most of the spring and summer training for the ride. I regularly cycle 2 times a week, but I tried to add in a weekly third ride. I also tried to stretch the distance and speed on my extra ride. Brett and I spent my birthday weekend in May cycling the C&O Trail in Maryland with our friend Aaron. In early July, Brett and I cycled around New England with our pal Rich. I did the 25 mile ride for the Sweet Corn Challenge just a few weeks back. I am pretty consistent at 12 mph and can easily do 30-40 miles with no issues. 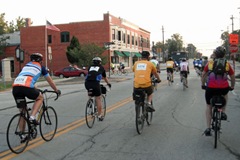 I was a bundle of nerves starting out on the ride. Seeing 2,400 cyclists in one spot; many of them being much more fit, much more professional, and much more prepared; was intimidating. Taking advice from my friends Adarsh and Michael who have cycled a lot, I went into this knowing that this was a ride and not a race. My goal was to finish. My biggest fear was being one the people they picked up at the end of the race who are still on the course. 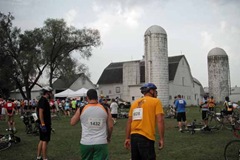 Saturday: We were off at about 7:06 a.m. from Middleburg Heights and were in the midst of a pack of 30-40 cyclists. For the next 5-10 miles the pack started to stretch and thin out. After the first rest stop, the riders spaced out quite a bit. I was moving above my target speed and having no issues. At about 37 miles I hit a big hill and was too aggressive pumping up the hill. The result was a severe leg cramp on my left leg. I thought it would end my ride. I slowed and paced myself. The next 20 miles were the hardest for me. The 5 miles leading into Berlin Heights were killing me with heat, constant uphill grade, and my leg pain. 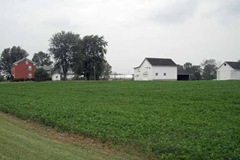 After a much needed rest stop in Berlin Heights, I was in much better shape. I cycled into Sandusky with relatively no problem. There was a pretty constant headwind and rain for about 10 minutes. That rain was so welcomed. After a cold shower and dinner at a sports pub, Brett and I called it a night watching a Hot in Cleveland Marathon on TV Land before we dozed off around 9:00 p.m. 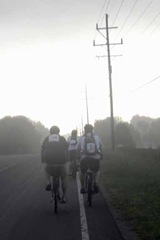 Sunday: 4:30 a.m. came early, but I felt amazingly good with just some lower back pain. After the pancake breakfast at the high school, Brett and I headed out at 7:06 a.m. again. The weather looked ominous. I was sure we were going to get wet. The skies cleared within an hour. The hill back into Berlin heights was a killer. Add to that, the return route had us cycling south on a chip and seal road for several miles with a strong head wind. During that stretch, I had my second thought of the weekend that I might not finish. I will definitely remember Berlin Heights! 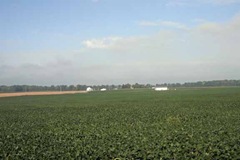 Soon we were heading east on nice flat country roads passing field after field of corn. The trip got easier for me. Unfortunately the heat really picked up. The open farm field with no shade only made it hotter. I was drinking 2 water bottles between rest stops. I knew the danger of heat stroke and exhaustion and was keeping myself hydrated since I felt it coming on. I took longer rest breaks and paced myself for the remainder of the afternoon. 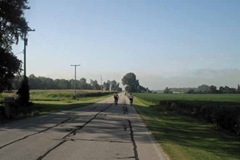 The excitement of turning the corner seeing the finish line was very emotional fro me. I was in tears as I rode up that street. Brett had pulled aside and was waiting for me and joined me as we crossed the finish line. MS families and supporters had lined the driveway cheering you on as you passed under the big inflatable rainbow. It was an experience that will stay with me for a long time. 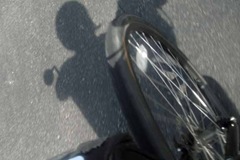 Here are my stats. I averaged 11.9 mph on Saturday and 11.8 mph on Sunday, just shy of my goal of 12.0 mph. I know this is so much lower than road cyclists, but it was fine for this older, fatter guy relatively new to cycling. It took us 8:40 to get to Sandusky and 9:00 to return to Cleveland. That time includes lunch and breaks. My cycling time was 6:22 on Saturday and 6:26 on Sunday. We finished with a large group of cyclists. I knew there were many more still on the course when I checked in. 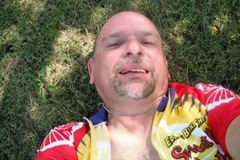 I learned a lot about myself on this ride. I know I need to stop putting myself down. Looking around I saw many of the same road cyclists at each rest stop. My speed was acceptable. I learned to look for more short term goals. I noted the miles to the next rest stop and made it my goal, one stop at a time. When I started thinking of quitting, I kept telling myself I could go on. I always feared hills. Only once did I walk my bike. My friend Michael from California, an avid cyclist, reminds me that there is no shame in walking a bike up a hill. I knew that at that hill and that I did not have the energy and needed to conserve it to go forward. I now take hills slow and steady and reward myself with a big drink of water at the top. Most of all, I know I can do a ride terrain like this in future. 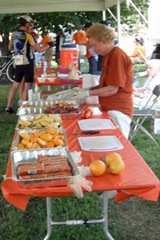 I can only say good things about the MS organization for this ride and the support they provided. I heard there were 15 support vehicles and almost the same number of medical emergency vans. They seemed to be everywhere. I often thought as the cruised slowly past me that they were putting bets on how long it would be before they had to pick this guy up. I also appreciated the Honda Gold Wing Club members who were our shepherds along the way. 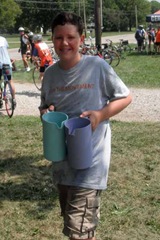 The rest stop volunteers were some of the best people; friendly and encouraging. Fruits, cold drinks, and snacks were plentiful. My favorite was rest stop 5 on day 2 on the shady front lawn of a farm in rural Lorain County. They had plenty of ice and popsicles. The mid day sun was brutal and people were exhausted and dehydrated. A 12-13 year old boy made the rounds on the lawn with pitchers of ice cold water. That was so appreciated.

Thanks again to all who have supported me with donations and words of encouragement. Thanks to my partner Brett who although a faster cyclist waited at each rest stop for me. It was a life changing experience for me that I hope to do in the future. Think about riding with me next year!