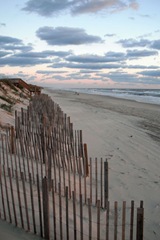 The only thing worse than a rainy vacation is a rainy vacation at the beach. That about sums up my vacation this past week. Brett and I spent the week in the Outer Banks with friends and family. We had a super nice house on the beach in Corolla. It was the nicest we have rented to date with an in ground pool and nice amenities. We will likely return to it on a future visit.

Our first weekend was quite nice with sun and temps in the 80s. Rain  rolled in late Sunday a 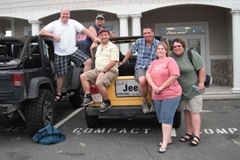 nd more or less lingered for the week. There was a slight respite on Tuesday afternoon. We enjoyed an afternoon riding Jeeps in the off-road area of Corolla looking for wild horses. We  were lucky enough to see about 2 dozen horses throughout the afternoon. 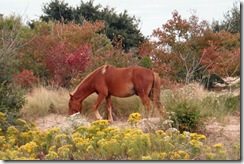 On Thursday, the remnants of tropical storm Nicole rolled through the Carolinas. The Outer Banks was spared the worst of the storm as it passed inland to the west. We did get the wind, high waves, cloudy skies and occasional showers. It poured buckets Thursday night as the tail of the storm passed over head. 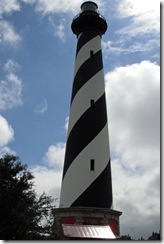 The weather forecasters said that Friday would-be a perfect sunny day. Well, they lied. The cloudy skies lingered with occasional showers. We headed down the Banks to Hatteras. We were lucky  that some sun passed by while we were at the Hatteras Lighthouse.

We could not go to Ocracoke Island since the ferry service was suspended due to the weather. It remained closed on Saturday. The Bodie Island Lighthouse, my favorite, was covered in scaffolding. It is being restored and will reopen in 2011. For the first time, you will be able to walk up this lighthouse. 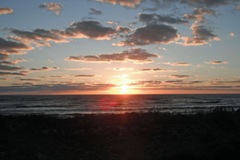 Actually a rainy week is restful. I caught up on some projects. We played cards and games. We did more shopping than we usually would. I think we all had a good time. It was amusing that we drove home Saturday under sunny skies only to be welcomed to rain as we got 30 minutes from home and unpacked the car.