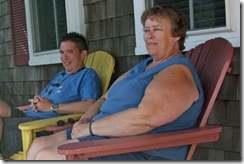 This past Friday my husband’s mother, Bonnie Berger, died unexpectedly at the age of 63. We never know when a loved one will pass away. In today’s world of advances in diagnosis and treatment, 63 is indeed an early age to die. I knew I wanted to blog about Bonnie’s life and death but found it to be a difficult task.

In February I faced a similar task when I spoke of my mother’s life and family on her passing. It seemed easier at that time. It wasn’t because I knew my mother better. It was because my family anticipated her passing was near at age 91 suffering from Alzheimer’s. She had lived a long life. Bonnie’s passing came way too early. She was just about to enter her golden years. I am happy to share my view of Bonnie’s life from my relationship with her from the past 21 years. 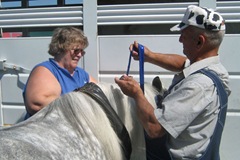 Bonnie’s life was defined by her love of the country and as a dairy farmer’s wife. Bob and Bonnie settled on the Berger homestead in central Ohio outside of Utica, Ohio milking a herd of Jersey cattle. One of my early remembrances of Bonnie was at the Ohio State Fair where the Berger family showed Jerseys for over 50 years. I knew nothing about cattle breeds other than some were white and black and others were brown. I was quickly educated on why Jerseys are superior, as well as, the people milking them.

Speaking of fairs, Bonnie took pride in showing cattle and draft ponies at fairs throughout Ohio. Bonnie was a take charge type of woman who organized the family’s presence at fairs. Her love for the traditions surrounding fair competitions was so evident. She was a true competitor. Many weekends from late July to mid-October found the family at competitions across the state. I have often heard of my husband Brett’s escapades at the fairs behind his mother’s back. I suspect she was aware of more than he ever expected. 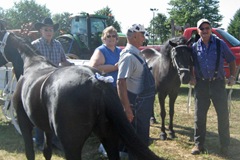 When the Berger boys retired from dairy faming, draft ponies replaced cattle in county fair competitions. CarBon Farms was born as the alliance of Bonnie with her daughter Carol. In recent years, Brett took a special interest in showing the draft ponies with his mother, sister, family and extended family members. Without a doubt, CarBon Farms drew the family closer together. Bonnie chose to work behind the scenes. This summer Bonnie competed at the Hartford Fair. She was pretty proud of that moment. I know that the sweltering August heat of the Hartford Fair will always remind me of the good times at the fairs with Bonnie.

Bonnie’s spirit of competition went beyond the fairs. The Berger family loves to play cards. This was not the case in my family. At Christmas, I am dragged reluctantly into card games. Those who know me know that I do not care for competition and would just rather the game be over ASAP. That was not the case for Bonnie. Winning was very important to her. She was the enforcer of rules and called you out when you done something wrong. I think I frustrated her since I could care less if I won or lost and could care less if someone did something wrong. 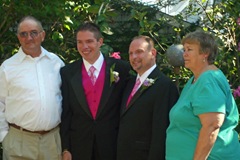 I am especially proud of Bonnie’s acceptance of me early on as Brett’s partner. As with most new gay couples, families search for the right thing to do and the right thing to say. It took a few years for our relationship to be fully accepted. I became a part of the family and their holiday gatherings. She always welcomed me. One notable thing I recall about Bonnie was that she always looked for something a person really wanted for Christmas and made sure they got it.

Brett and I were fortunate to have Bonnie and Bob travel to Provincetown for our wedding. It meant a lot to us for them to be there. I never knew the extent of the significance of this until this past weekend. Many of Bonnie’s neighbors, coworkers and friends told me how proud she was of our relationship and how she spoke often about us. 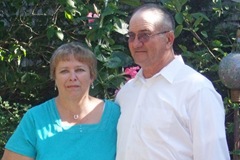 Bonnie was fortunate to have Bob as a husband. Their relationship is one that is seen less in today’s society. They met as youth, showed cattle together, dated in high school, and married soon after. They spent 42 years as husband and wife. As with most Midwesterners, they were not much for personal displays of affection but their love for each other was evident. I would say that they defined each other’s life.

I’ll close by sharing a verse of a poem, Miss Me–But Let Me Go, the minister read at Bonnie’s funeral. I think it says it all. We may feel sorrow in a life cut short, but we need to remember the impact the person had on our lives. Most importantly, we need to live our lives to the fullest and do good deeds in the deceased remembrance.

Miss me a little–but not too long
And not with your head bowed low.
Remember the love that we once shared,
Miss me–but let me go. 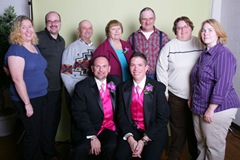