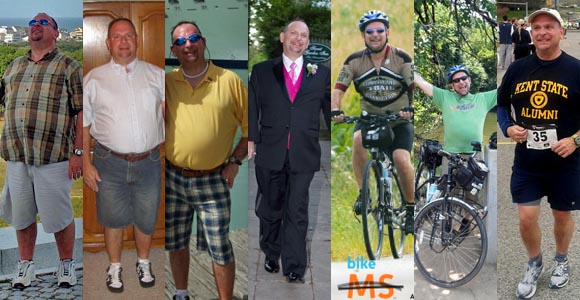 There must be times in your life that you have wished that you could predict the future. Life would be so much simpler if you knew what lies ahead. The reality is that we have no genie in a bottle, and we are not a living breathing fairy tale character granted three wishes.

Four years ago, today I underwent laparoscopic gastric banding (Lapband) weight loss surgery. As I nervously waited for the anesthesia to take effect, I wondered where surgery would take me. Those thoughts have never left my mind. I have found that weight loss surgery did transform me. It changed me in ways I never imagined in 2008. Here is my weight loss story told thru the seven photos in above collage.

The camera does not lie

In October 2007, I was on vacation in the Outer Banks. This photo at the Wright Brothers’ Memorial visibly showed my failure to control my weight after a heart attack and triple cardiac bypass two years earlier. The images weighed on my mind and were instrumental in my 2008 New Year’s resolution to have weight loss surgery.

On July 16, 2008, after months of preparation and testing, I was ready to leave for the hospital and posed for this photo. I was mentally ready. I had begun a daily exercise routine six weeks earlier at my surgeon’s urging. He had told me that success as a Lapband post-op relied heavily on regular exercise and adherence to a bariatric diet.

In early December 2008, my partner Brett and I took a Caribbean cruise. At five months post-op, I could see the difference in my appearance for the first time. I had to buy new clothes for the cruise. It was that point in my weight loss journey that I knew my life was changing.

On September 19, 2009, I married my partner of 20 years in Provincetown, Massachusetts. I was one of the happiest days of my life. I had become very comfortable with my new weight and appearance. Cycling and exercise had become an integral part of my life.

Pedal to the Point

By August 2010, I had discovered that I was a happier healthier person when I stretched my abilities. I cycled 150 miles over two days for the Multiple Sclerosis Society in their Pedal to the Point ride. Finishing that Sunday afternoon made me more determined to keep stretching those limits and living life to the fullest.

During the last week of June 2011, I cycled 325 miles with my best friend Chuck across the Great Allegheny Passage and C&O Canal Trails from Pittsburgh to Washington D.C. It was a week of the unknown, discovery and growth. I cannot begin to describe the emotions I experienced over that week and the excitement of cycling into Georgetown.

In April 2012, I ran my first 5K. My pal Chuck, a runner, coached me through a Couch to 5K program to prepare for the Black Squirrel 5K. Running changed my life again. It opened many emotions and challenged me in ways that I never imagined. I enjoy both the solitude and camaraderie that running brings into my life.

Alan Key, a famous computer scientist said, “The best way to predict the future is to invent it.” Over the past four years I have invented a future that was nowhere in the recesses of my mind. The only thing I saw in my future was a thinner Tom. I wanted those pounds to go away so that I could be healthier. Today, I weigh in at 195 pounds, 83 pounds lighter than early 2008. The future I invented is a happier Tom with a love for cycling, running, adventure and the great outdoors. I am truly a changed person still looking forward to inventing my future.