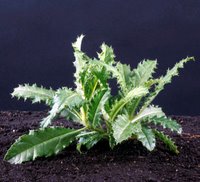 If you are a gardener in Ohio, you are familiar with thistles. I have fought the good fight to eliminate them. I’ve pulled them, poured boiling water on them, doused them in Brush-B-Gone and dug down many feet. The results are always the same. In about 2 weeks, they reappear.

After spending over a week mulching our landscaping 6inches deep, I had hoped the thistles would disappear. Well, I knew they wouldn’t. I waited to see how long it took for them to reappear. It took less than a week. So, I’ll be pulling those demon thistles the rest of my life.

Are you curious about the origin of these weeds? I looked it up on the web. Here’s an abbreviated history. Canada thistle is a native of southeast Europe that was introduced accidentally to North America in the late 1700’s. Since that time it has become one of the most troublesome perennial weeds throughout the northern United States. The persistent nature of Canada thistle is due largely to the extensive root system the plant produces. In order to eliminate this weed, the entire root system must be drained of energy reserves. No matter what strategy (herbicides, tillage, mowing) is used, it will take repeated measures to bring established patches under control.