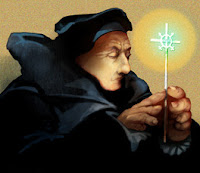 OK, two religious posts in a few days… I promise that I am not going to get over religious on you this week, but today’s USA Today’s Monday: On Religion editorial page featured an editorial by Mary Zeiss Stange, professor of women’s studies and religion at Skidmore College. You can read the column here. In her editorial, she posed the question, “When it comes to gays, what would Luther do?” As a Lutheran, that title grabbed my attention.

Of course, supposing how Martin Luther would react in the 21st century is purely hypothetical. She posed many interesting arguments that given Luther’s radical thought of the day centuries ago he might stand on the side of GLBT rights in the Church. Beyond Luther she spoke of the Augsburg Confession and the setting aside of Old Testament practices including circumcision and eating pork. Yes, Christians do indeed eat pork and circumcision is a choice today.
Yet so many fundamentalists are infatuated by Old Testament sodomy. She made a clear case that these passages were not about same-sex love but about abuse and prostitution. Is this not the same argument as eating pork or shellfish? Are we sinners for eating at Red Lobster or Damon’s? A passage, even a Bible passage, taken out of context and in with regard to the civilization and time in history is pretty shaky. God gave us brains and hearts to discern the real messages in the Bible.
(Visited 1 times, 1 visits today)
elca lgbt