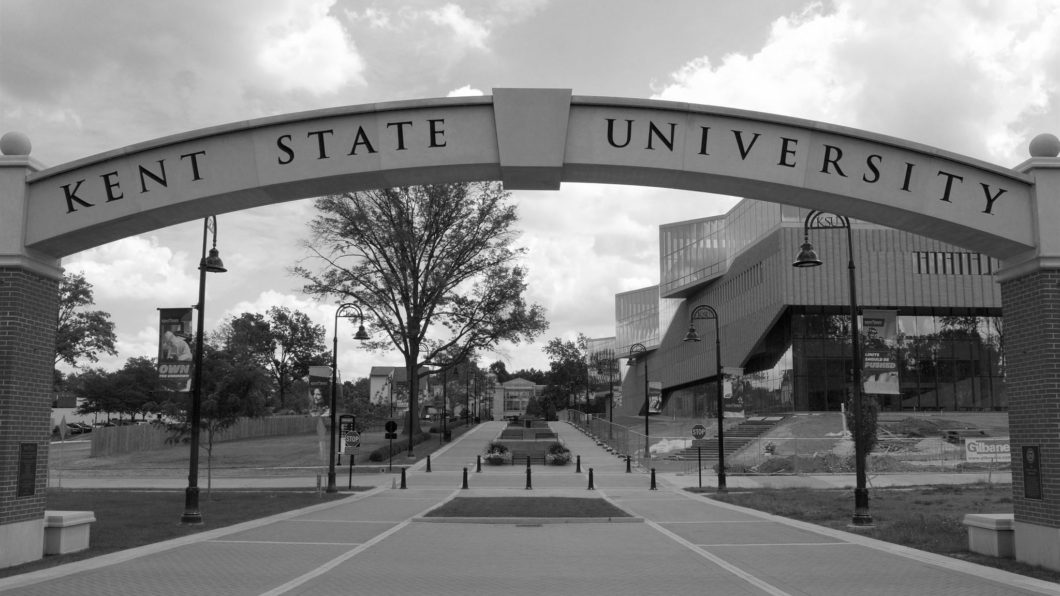 The Ohio National Guard fired into Kent State University anti-war demonstrators at 12:24 pm on May 4, 1970. Four students were killed. I was a high school sophomore 25 miles away. Kent State was the college of choice for many students in my hometown and high school. The controversies of the shootings would divide Northeast Ohio and the nation for years.

The world was in turmoil during my high school years, 1968-1972. Martin Luther King Jr. and Robert Kennedy were assassinated. The Vietnam War, anti-war protests, and racial unrest dominated the news. The LGBT rights movement gained visibility with gay men rioting against police raids of the Stonewall Inn and gay bars in New York City.

My first visit to Kent after the shootings was in the summer of 1970. I accompanied my brother to the campus as part of his freshman orientation. It was eerily quiet. Living in the Kent area many years later, I relished the quiet time when the 25,000+ students were away for the summer. The quiet that summer was different; somber and uncertain with the closure of the campus in the aftermath of 05.04.1970.

My high school years were ending in 1972. I was a gay teen confused about my sexuality and closeted. They were not happy years. My high school and community were not welcoming to minorities in any form, a sadly common thing at that time in Ohio. I was anxious to put those years and memories behind. Kent State was a pathway to a happier life.

I started my Kent State years at the Stark Campus transferring to the main campus after one quarter. The Stark Campus seemed like a continuation of my high school years. My winter 1973 quarter move to the main campus was a welcome change in culture. Classes included many racial minorities that were non-existent in my white rural high school. It felt like Alliance was 1,000 miles away rather than 25 miles.

The shootings, fresh in the memory of many students on campus in 1970, fueled an atmosphere of activism at the university. Demonstrations by the Students for a Democratic Society anti-war protestors and other student activist groups were common. The Daily Kent Stater, known to not shy away from controversy, published a weeklong series on gay students and gay issues. Student activities’ offices in the new student center reflected the diversity of the university.

The aftermath of the May 4 shootings and the culture of Kent State moved my life to a much better place. Kent gave me an excellent education leaving me well prepared for a successful career. Beyond education, Kent gave me a wider perspective of life and the world beyond the limited world view of my pre-university years.

Kent exposed me to the lives and struggles of minorities; things unknown to me coming from a segregated small Ohio city. Other gay people were visible for the first time in my life. I would return to Kent in 1979 for my first gay gathering and the beginning of coming out as a gay man. My work in LGBT advocacy in the church, community, and at work began with seeds planted at Kent State.

A lifetime of respect for the diversity of opinions began as I watched demonstrations on the student center plaza at lunch. The students’ passion for the war, minority rights, gay rights, and many other topics expanded and enriched my life. Gatherings were peaceful with no violence. The university cultivated that culture of respect for activism.

Kent broadened my worldview with people accepted for who they were with no limitations. My upbringing was in a community that purposely marginalized people and things that contradicted their small world view. I was fortunate to have an academic advisor with wisdom beyond his math expertise that helped me see that my college years were also about shaping my place in the world.

Twenty years after graduation, my husband I built a home 6 miles from campus in Brimfield Township. The next twenty Brimfield years were filled with fond memories of Kent and Kent State. The city and university transformed before my eyes. Tired downtown streets of worn out bars, fast food, and abandoned storefronts were replaced with a vibrant collection of restaurants and shops. The university and downtown were connected by a wide landscaped promenade.

May 4 commemorations have evolved over the years. The 1970s saw more vocal and confrontational student-led demonstrations. The university and Kent community shaped the May 4 commemorations as the years passed. The focus today is truly Kent; honoring the lives lost and learning from the 05.04.1970 events. The commemorations encourage people to pursue personal freedom of expression and social activism to make the world a better place.

Fifty years after 05.04.1970, the commemorations remain controversial. The 50th-anniversary commemoration, many events canceled due to COVID-19, featured controversial speakers including Jane Fonda. The wounds from 1970 are still open and unchanged in many people’s minds. The resolve to encourage freedom of expression and social activism is nurtured by many who observe this weekend.

05.04.1970 left an imprint on my life. Today, I vividly recall walking through chanting demonstrators. I remember the visibility of gay people speaking out on campus. I remember the atmosphere of acceptance that molded my life. My college years at Kent led me to a life of advocacy. Freedom of expression and social activism are at the core of my life. I recall all this and more every year on May 4.