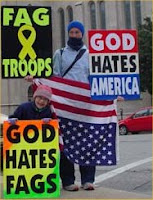 Yesterday I listened to one of the most intriguing interviews on a podcast. Feast of Fools had an interview with Shirley Phelps of the Westboro Baptist Church in Topeka, Kansas. If the name seems somewhat familiar, she is one of the Phelps family members who picket funerals of AIDS patients, soldiers killed in Iraq and numerous other gay related events. The most notorious picketing was at Mathew Shepard’s funeral.

You may wonder how she came to be interviewed on a gay podcast. She had been interviewed by gay writer Josh-Kilmer Purcell for a story in Out magazine. Since the initial interview, Shirley and Purcell have maintained an email conversation and “friendship”. Feast of Fools brought them together via telephone for the first time on this podcast.

An interesting twist is that Josh-Kilmer Purcell maintains the Phags for Phelps web site where he believes that the more you lift the Phelps family into the public spotlight; the more that you make discrimination of LGBT people more obvious and distasteful to the general population. I have to say that it has some merit.

I think the most revealing thing to me was how educated and well spoken she is. She is a lawyer and comes from a background in civil rights (as does Fred Phelps). Yes… that’s right, civil rights! She has strong conviction for not tolerating discrimination, particularly race-biased. I know that this seems to fly in the face of how she treats LGBT social issues.

You have to admire her for her convictions. She has a very strong belief that the Bible is unerroring and MUST be taken word for word. As she reads the story of Sodom and Gomorrah, it is obvious that the sin was homosexuality. (Many contemporary Biblical scholars see the sin as being inhospitality and sexual abuse.). She treats that sin no different than adultery, divorce or dishonesty. They can not be tolerated. It’s plain and simple. Sin is sin and to tolerate any sin is against God’s will and will surely lead you to eternal damnation.

I won’t go into more of the specifics of her interview. I recommend that you listen to it yourself. I believe that it is a good thing to try to see the world from the eyes of someone who takes the opposite point of view that you do. The family’s journey is quite interesting. She is very clear in her beliefs and is not timid on expressing her views.

I had the opportunity this past year to attend the ELCA Churchwide Assembly and was put into the situation of listening to people with very diverse viewpoints. I quickly learned that although these views are not your own you must learn to listen carefully and put yourself in their shoes. I left Chicago with great appreciation for many of these people.

Many, like Shirley, had headstrong convictions. The challenge to the Church is to be able to understand each other and come to a common ground where all are heard. This is only possible if we allow our minds to arrive at common convictions that serve the Church and its work well in our world. This actually occurred in the restraint resolution passed at the assembly.

There are people like the Phelps family on both sides of the LGBT inclusion debate. They live in a world where everything is black or white. We know that this is not the real world. It is not that simple. There is a vast expanse of grey areas. We all are sinners. That does not excuse the type of sensational behavior that the Phelps family exhibit to make their message known. They have crossed the line of free speech into a world of encouraging and enabling hate. Check out their picket schedule on their web site. It is quite disturbing.

Along with those “selected” Biblical verses are those in John 15. They speak of love and respect one another. If you are a Biblical purist, they carry the same weight as all other verses in the Bible. The Bible can not be read in a vacuum. You must the verses into the context of the story and the time. The stories in the Bible progress over time. Have we not progressed in the past 2000 years?