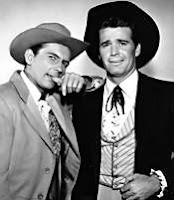 Man I haven’t heard so much about Maverick since I was a kid. It seems like any day I expect to see John McCain dressed as Brett Maverick and Sarah Palin as Bart Maverick with six shooters. I go back to my post several days ago about how rightwing organizations attempt to hijack a word and create an illusion that they represent that word.

John McCain and Sarah Palin are prime examples of this fundamentalist tactic. Barack Obama has a campaign based strongly on change that is popular with the American people right now. It’s the ideal vehicle to highjack and take for a ride with the Republicans appearing as change agents when they really are not.

The Cleveland {Plain Dealer runs a column where candidate ads are graded for truthfulness. In fairness, they chose a current TV ad from each of the Presidential Candidates. Today’s ads were McCain’s and Obama’s maverick ads. Below is a highlight of each review with a link to the full article. Read the articles and see who the real Brett and Bart Maverick are.

McCain ‘maverick’ ad inconsistent with facts
RATING 2 on a scale from 0 (misleading) to 10 (truthful) (Numerical rankings done by The Plain Dealer.).

Palin was originally for the Alaskan “Bridge to Nowhere” while running for governor – before she was against spending federal money to build it. She opposed the bridge only after it had become an embarrassment to the state and after $233 million in federal money earmarked for the bridge was diverted to other transportation projects in Alaska.

In six of his 25 years in Congress, McCain voted for spending bills that included 12,763 pork-barrel earmarks worth more than $144.4 billion, according to the nonpartisan Congressional Research Service…

Obama ad walking a tightrope in criticizing McCain’s advisers
RATING 8 on a scale from 0 (misleading) to 10 (truthful) (Numerical rankings done by The Plain Dealer.)

McCain himself is on record saying he voted for George Bush’s proposals 90 percent in 2007. And, the Anchorage Daily News reported that Palin supported funding efforts for the Bridge to Nowhere in October 2006 while she was campaigning for governor…