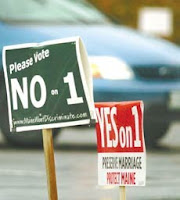 It was truly a disappointing defeat in Maine. Voters repealed the legislature-passed same sex marriage law. I think we have all come to see New England as that independent progressive region of the USA where Yankee mentality favors individualism and freedom above all. The passage of Issue 1 seems to fly in the face of this.

In the back of my mind, I knew that the results of ballot initiatives related to same sex marriage have never favored same sex marriage in 30 other states. I also truly believe that issues of civil rights have no place on the ballot. Yes, this is a matter of civil rights. Civil marriage does indeed bestow special rights and privileges. Denying a group of citizens this right, does discriminate against them. Time and time again I tell people that this has nothing to do with the church secular rites of marriage.

As I have read GLBT and progressive blog entries over the past few days, there is a definite tone of accusing voters as being bigoted and haters. Before you rush off and do that, remember that the majority did vote to repeal the law in Maine and California. Can we call them all bigots and haters? I say not. The reality is that the majority of Americans support equal rights for GLBT people. Many polls support that as a fact. However, the majority does not support same sex marriage. So, it is not a gay hating issue, it is a marriage issue.

So why do non-GLBT people not support same sex marriage? I think it is a combination of religion and perception. Many people still harbor the image of gay people as being promiscuous and unable to maintain a monogamous relationship. A large portion of people do think that allowing gays to marry somehow degrades the institution of marriage. These are the two issues that GLBT people need to educate society on for society to speak on behalf of gay people.

Let’s face it; it’s easier to enact laws that do not impact you personally. Gay people are easy faceless targets. If we are to protect marriage, where are the ballot initiatives to outlaw divorce and infidelity? Is monogamy a requirement to obtain a marriage license? There are a myriad of issues that impact the institution of marriage. Two men or two women getting married have nothing to do with them.

We are in that painful stage of an equal rights movement where the prize is within reach. Unfortunately, those who seek to preserve the status quo and defeat these rights are also aware of that. They are stepping up their actions to push back the progress. As with women’s’ and racial oriented civil rights movements, they ultimately will not prevail.