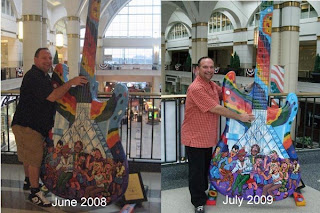 I haven’t done any before and after shots of myself during my 70 pound weight loss over the past year. Brett and I spent this past weekend in Chicago visiting our good friends Al and Keith. We took the MegaBus from Tower City to Chicago Union Station.

While we were waiting at Tower City, I spotted the painted guitar statues that are found throughout Tower City. I remembered that a year ago during Cleveland Pride I had a photo taken of me with one of them. I had Brett take a photo this year so that I could compare the two shots. What was pretty amazing was that it is the same guitar. The photos were taken at different locations and there are dozens of them throughout the complex. We had no idea that it was the very same guitar as last year.