The rain had settled into a drizzle after several hours of heavy rain and periods of clearing. I had finished the very wet Rubber City Race Series Get Thirsty 8K. From my perch on the upper end zone patio I watched the final runners cross the finish line. The official end was 90 minutes after the race start. Yet, race officials and finish line volunteers stayed at the line at 10-15 minutes later.

Shortly after, a lone runner entered the stadium struggling to reach the finish line. It was obvious she was exhausted and out of fuel. An amazing thing happened as she crossed that line. Cheers erupted from the stadium. She was treated like a winner as she received her medal. She must have been overtaken with emotion. That is an athlete my friends.

A friend posted two questions on Facebook that morning. How do you define an athlete? What is your motivation for competing in endurance events? I had already decided to blog about this runner and her determination to cross the finish line. These questions only made it more evident that I need to talk about this topic.’

How do you define an athlete?

For years I embraced the idea of an athlete being the person who excelled in their sport. They were the guys draped in medals, holding trophies and receiving fat paychecks for their endorsements. As I became a more active person, my involvement in cycling, running and hiking changed my perception completely.

“If you run, you are a runner. It doesn’t matter how fast or how far. It doesn’t matter if today is your first day or if you’ve been running for twenty years. There is no test to pass, no license to earn, no membership card to get. You just run.” — John Bingham

You can substitute “run” with the name of any sport in John Bingham’s quote. The message is clear. If you participate in a sport, you are an athlete. You can be fast or slow or crossing the finish line first or last. The fact that you participated is all that counts.

I am particularly proud of that crowd at Infocision Stadium last Saturday morning. It showed that I was not alone in my feeling about what an athlete is. So many people gave that lady the recognition she deserved for that race. I do not know or need to know her backstory. I only need to know that she persevered for 8K to claim victory. Victory as an athlete is not necessarily receiving a medal. It is more about achieving a goal that mat have been seen as unreachable.

What is your motivation for competing in endurance events?

Triathlons, marathons, and century bike rides are tests of physical and mental endurance. Each of these tests the will of the athlete to compete and complete. I believe the motivation is one of being the conqueror. It is about conquering what seems unachievable. It is about conquering inner doubts and preconceived notions that make them seem unattainable.

“Crossing the starting line may be an act of courage, but crossing the finish line is an act of faith. Faith is what keeps us going when nothing else will. Faith is the emotion that will give you victory over your past, the demons in your soul, & all of those voices that tell you what you can & cannot do & can & cannot be.” – John Bingham

John Bingham’s quote captured my reason in completing my first endurance cycling event in 2010. I cycled the 2-day 150 mile Bike MS charity ride to claim victory over my past and free myself from feeling I could never achieve such a goal. It was a life changing event for me.

Endurance events challenge me to grow and set the bar higher. After I developed comfort with cycling, I began running. It challenges and motivates me in a different way. I ran at half marathon for the first time in 2014. In 2015, I will hopefully complete 4 half marathons. I see each half marathon or century ride as an opportunity to grow a little more in my self-confidence and happiness as a person. 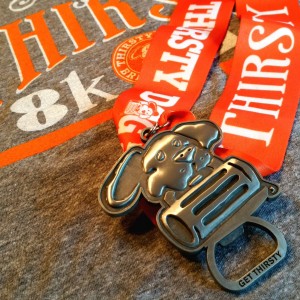 I have to admit I like the medals. I hang my medals on a display along my home office wall. I enjoy seeing what I have accomplished in the past few years. Medals also have a way of bringing back memories of the good times. They also urge me to continue on my path to a happier healthier life.