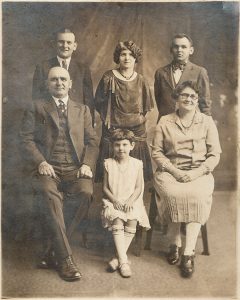 In the early 20th century, Mihaly Bilcze, his wife Meri, and children Mihaly and Meri left their home in Verocze, Hungary.  They were part of the great Eastern European emigration to the United States looking for a better life. They settled in Alliance, Ohio where they gave birth to two additional children, my father Joseph “Jokie” and my aunt Irene “Goldie”.

I was surrounded by Hungarian-American culture through my teens. My grandparents’ home was in the center of the Alliance Hungarian neighborhood. My father’s bar was one of the neighborhood gathering spots for those Hungarian families who labored in the steel foundries in the shadows of their community. The Hungarian Presbyterian church, less than a block away, hosted countless paprikash, cabbage roll, and gulyás dinners. My father’s bar sold the spicy sausages and pastries the church ladies made for fundraisers.

Sadly, I did not value this rich Hungarian culture during those years. I was raised in a rural setting outside of the immigrant neighborhoods of the city. In my eyes, my fellow classmates were more American than my family. No one could pronounce my last name. I was one of a handful of children of Eastern European ancestry attending my grade and high school. There was no question that I wanted to hide my Hungarian heritage and be more American like my playmates.

Almost fifty years have passed. In my life, I came to understand that I had a very rich family heritage. I experienced food and culture in ways that many of my classmates were unable to experience. I heard stories of the good times in the “old country”. My family was more American than I realized as a 10-year-old. My grandparents, aunts, uncles, cousins and parents built the America we know today from their Hungarian roots. 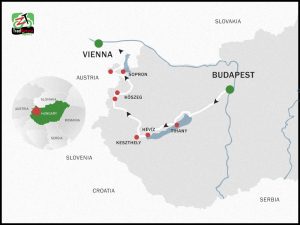 One of my dreams has been to travel to Hungary and experience firsthand the land of my ancestors. Retirement gave me an open window to do just that. As an avid cyclist, it only seemed natural to travel to Hungary and explore the land of the Magyars on a bike. I did a good bit of research and found a bicycle tour that would immerse me in the heart of Hungary where I could see the people and places from behind a handlebar.

This Thursday I depart on a sixteen-day tour of Hungary. I am flying into Vienna where I will spend three days before hopping on my bike for a ten-day bike tour. I will ride my bike and visit the small villages and towns along the shores of Lake Fertő and Lake Balaton. My adventure ends with three days in Budapest, one of the crown jewels of European cities. I am planning on cycling in both Vienna and Budapest.

I am excited and a bit nervous at this point. I look forward to sharing my daily exploits and photos on this blog. I hope you come back and follow me on this journey of a lifetime. I would especially appreciate your comments as I am sure I will be somewhat homesick since Brett is unable to join me on this adventure.