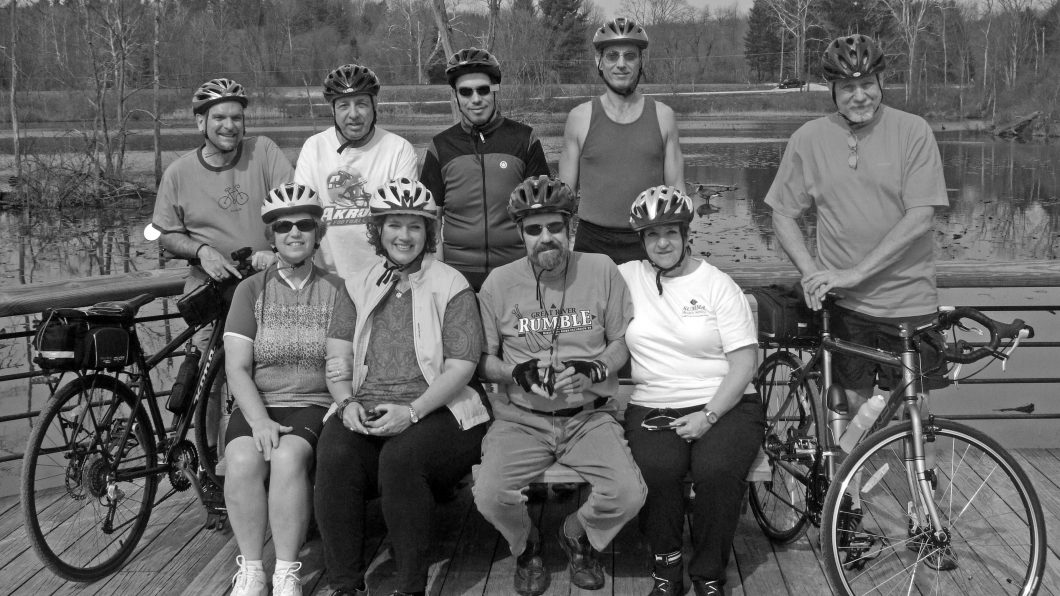 I pedaled west from Berea towards Sandusky from the starting line of the 2010 Bike MS 150 Pedal to the Point. I was surrounded by 2,400 cyclists, most of them much more experienced, fitter, and on much more expensive bikes. I questioned if I had any right to cycle with them.

I found my tribe in the summer of 2009. I surrounded myself with people who shared a common view of cycling. During the winter, we laid out plans to take our tribe to a new level, a bike club. We felt strongly that this should be a bike club with a mission. That mission would be to encourage a healthy diet and weight, active lifestyle, and make cycling enjoyable to people of all physical abilities in Akron-Canton.

Encourage a healthy diet and weight; active lifestyle; and open the world of cycling to riders of all physical abilities in the Akron-Canton community.

Spin-off Cyclists was born on an Easter weekend Towpath Trail ride from the Merriman Valley to the CVNP Beaver Marsh. There was a general feeling of pride and community on that beautiful spring morning in 2010. All the cyclists continued to Peninsula. For most, it was their longest bike ride.

The Spin-offs grew in the following years. The tribe filled a void in the local cycling world. A key promise of the Spin-offs is to leave no cyclist behind. Many bike clubs proclaim but fail to deliver on this promise. The Spin-offs founders experienced this undelivered promise and made it a key part of our rides.

There are many tribes in the cycling world – road cyclists, mountain bikers, bicycle tourists, bike commuters, bicycle , slow roll cyclists, and the list could go on. They form their tribes around a shared vision of cycling. If you get on a bike, there is a tribe that speaks to you. You may be the person to start that tribe.

My tribe over the years focuses on the principles that the Spin-offs lived by. I advocate introducing non-traditional cyclists into the cycling world. I see cycling as a social activity that leads people to a healthier happier life. I will never leave a new or struggling cyclist behind.

I share the above story as motivation to find your own tribe. Maybe it’s not cycling but something else. What happened in my life with the Spin-offs is a good example of people wanting to share something that changed their life so that others could experience the same change. Those people transformed my life on the countless rides we shared.

Today, I live a life of looking to make a difference in my community. I am in a new place, a community that lacks much of what I discovered in Akron in my years with the Spin-offs. I want to build a tribe of cyclists sharing a vision of cycling like mine but also a vision we can build together.

Back to that Bike MS 150 in 2010 –Two days and 150 miles later, I crossed that same starting line, now the finish line. I accomplished something that was unfathomable a year earlier. My blog post talked about the changes I was experiencing driven by the Spin-offs. I was understanding myself, motivating myself, and being more confident to move into the unknown. I was living a better life because of this tribe.

… I learned a lot about myself on this ride. I know I need to stop putting myself down… I learned to look for more short term goals… When I started thinking of quitting, I kept telling myself I could go on…