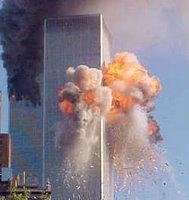 Today is September 11; the 5th anniversary of the terrorist attacks on the World trade Center, the Pentagon and America. Do you remember where you were when you heard the news? The only other event that comes close to this for me was when President Kennedy was assassinated. I was riding the school bus home when at a stop a parent came out of her house crying that the President had been assassinated. Even as a 4th grader, I knew the gravity of the news. Our family was glued to our TV for days afterwards.

On the morning of September 11, 2001, I was leaving a meeting at Roadway. As I walked through the cafeteria back to my office, people were gathering around the big screen TV watching coverage of the first plane’s crash into the World Trade Center. As the morning progressed, a TV was setup in office atrium with people gathering around watching replays of the crashed and fall of the buildings. Brett called from California later in the morning. This all seemed so unbelievable. I remember the day, especially the evening, being very solemn and sad.

It’s ironic that on the 5th anniversary of the event that totally transformed security and airline travel that I am preparing to fly this afternoon to Orlando for a weeklong training class.