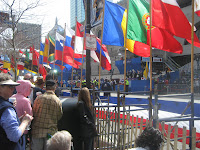 Early this morning I flew to Boston for the week. I am attending an IBM conference. A co-worker Scott and I were on the same flight. We arrived too early to check-in. We decided to walk around take a tour of the Back Bay. We strolled through the Boston Commons and Public Garden.

Today is the Boston Marathon. We walked over to the finish line since it was only 3 blocks away. We saw the first wheelchair cross the finish line. It was hard to see much because of the crowds. Later in the afternoon the crowds exploded as majority of the 25,000 runners arrived in town. The streets were packed. It was nice to experience it. Check out the video. (I had the camera on video by mistake.) She knew I was there! 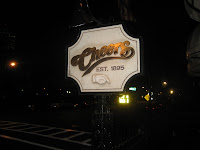 Tonight our IBM sales people took us to Cheers on Beacon Hill. It is the building where the exterior shots were filmed. That’s where it stopped. The inside was totally different. It was a good burger joint. I bought some Cheers souvenirs for Brett and me.