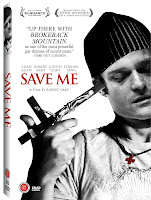 Brett and I just finished watching Save Me, a dramatic movie that explored the ex-gay ministry movement. Chad Allen portrayed a young troubled gay man addicted and on his last leg. Robert Gant from Queer as Folk and Judith Light of Ugly Betty and Who’s the Boss also were main characters in the movie.

With his family’s urging, Allen entered Genesis House, a ministry supported by an evangelical church that aims to “cure” men of their homosexuality. Allen formed a close friendship with Robert Gant, a gay man struggling for acceptance by his dying father. Their friendship evolves into love as the months go by. Judith Light, the wife of the husband-wife team running the ministry, sees the positive change in Allen and also the attraction to Gant. She struggles with this positive change and Allen and the developing attraction that she fears.

The movie started very slowly but as the complex story line developed, it moved quickly. The story exposed Light’s pains over her gay son’s suicide as she began to see Allen as this son. In a dramatic scene that I won’t reveal the story takes a very serious turn that exposes the dangers of these ministries. There are many other subtle hints from residents that the ministry just isn’t quite working.

I think this is a film worth seeing. It tells the story of ex-gay ministries in a very revealing light. The characters were very well portrayed. Besides Allen, Gant and Light, I thought Robert Baker’s portrayal of Lester was a show stopper. His lines were few but his actions and non-verbal expressions told a much deeper story of his character. The cast worked very well together.