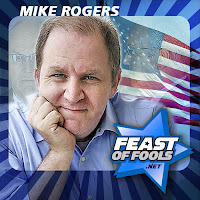 Each week I download group of pod casts that I listen to on my drive to and from work. It’s an interesting mix of NPR, bear, gay and comedy pod casts. I love the spontaneity of these pod casts. Some are not of the best quality but are entertaining.

Feast of Fools, billed as the most downloaded gay podcast, is one of those entertaining pod casts that generally has no real meat other than humor. Today I listened to FOF #605 – The Blogger vs. Larry Craig – 09.07.07. The guest was Mike Rogers, a political blogger from Washington D.C. Rogers is known for outing politicians and has drawn some criticism for this.
In this episode he spoke about Senator Larry Craig and his outing of him in October 2006. He talked about the years of research he does before each outing. It is clear that Larry Craig is lying and has indeed done this before. Like Rogers, I find it ironic that this individual works publicly to deny rights to GLBT people while performing gay sex acts in restrooms. Listen to this podcast, it is very revealing about what goes on in Washington D.C. behind closed dooors and even in the open. Larry Craig is not the only one. You can find Mike Rogers blog at http://www.blogactive.com/.
(Visited 3 times, 1 visits today)
lgbt