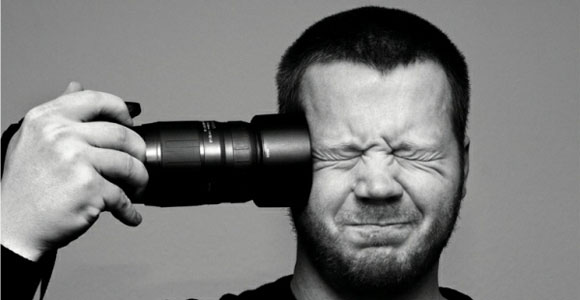 The reality is that we just look a little rounder when we are captured on film. I reason this off to how shadows and harsh light treat three dimensional objects on a two dimensional photo. It’s a crap shoot. Sometimes the light and angles are just right. Other times the light and perspective plays a dirty trick on us.

This past week I got a lesson on how I have interacted with the camera over the years. I am the subject of an upcoming print and multimedia advertising campaign for the bariatric center where I had my Lapband surgery. I was asked to gather some of my before and after surgery pictures to be used in the campaign.

I started by sifting through my photos from the 5+ years prior to my surgery. I figured they would be the ones where I was the most obese. I can tell you that this exercise brings back good and bad memories. I was particularly surprised how fat I was. I had always supposed that I was maybe somewhat pleasingly plump. The camera did not lie. I was fat.

When I began assembling my photos from about 1 year post-op to today, I was much more upbeat about the photo selection process. Suddenly, the camera did not seem as punishing. It was easier to find photos that I felt comfortable handing over to the public relations firm.  I will also admit there were photos that I came across that I thought I looked just a little rounder than I really am.

The interesting observation from this process was that I had no lower body before 2008. All of my photos were skillfully edited to be mostly head shots or upper body shots. I had to dig to find some full body shots that the public relations firm is most likely anticipating. Beginning with 2008, that all changed. I had many full body shots. It was much more a challenge to narrow down theses photos to a manageable group.

On Friday, I had a 5 hour photo and video shoot for the ad campaign. Action shots on my bike were filmed up to 10 times. An endless amount of still shots were taken. The videotaped interview took close to an hour and will be distilled down to a few minutes. I realized that these professionals were working with the camera, the light, the location and me to get that perfect shot. They were trying to trick the camera into taking away 10 pounds.

This exercise has shown that I have come a long way over the last three years. I was very conscious of my body in those photos from 2003, 2004 and 2005. I somehow buried that in my memory. It’s hard to admit you need improvement. As I transformed my body after surgery, I also upped my self esteem. Besides showing a full body in photos, you can see a more confident and happy person.  Maybe that camera does not lie.

Do I care if the camera adds 10 pounds? Let’s face it. I am human and like to look slimmer in photos. That has been engrained in me through celebrities, popular culture, advertising, and societal views. I just now realize that it is OK to look 10 pounds heavier, but that is a minor problem. Let the camera lie. I am ready for my close-up.